Who Wrote Luke (and Acts), and Why Did She Do It?

Who Wrote Luke (and Acts), and Why Did She Do It?

What constitutes controversial has become rather watered down—or at least far more common than the concept warrants. This is especially true when a TV episode or a performance is hyped as being controversial before it ever airs. The sex scene in the season finale of Looking, for example. So, when someone announces something as “controversial,” I’m leery. When this feeling remains—or even turns to indifference after interacting with this controversial item—I like to ask myself if I’m too jaded to find what’s controversial or I’ve reached a point—along with many others in society—where what was once a big deal no longer matters.

For Helms, the controversial argument he makes in his book is that a woman, in fact, wrote the Gospel of Luke. I can see why a great number of religious people in power would find this troubling (and, from their point of view, sadly unbelievable), but I rolled my eyes at this supposed controversy—if anything, you’d think this would be a relief. But before I walk further down that path, first, here’s what he has to say about this Gospel.

Women were not supposed to have a say in Christianity, so how—or even why??—would a woman write this? Well, According to Helms, it seems obvious that this suggests that the female role in the creation and the running of the early church might just be a little different than many people think.

So here’s his case: First, in Luke, only males fail to understand the point of the resurrection and Parousia (61). Women, on the other hand, are the first to believe (Luke 24:9, 11). He also isolates the “curious emphasis on female followers of Jesus” (62) with examples—Luke 8:2-3. Why is this significant? This passage is not echoed in any of the other gospels; therefore, Luke’s author must have wanted to stress its importance. From this, Helms gathered that Luke alone suggests that more women than men were in Jesus’ inner circle and Luke alone places these female disciples at Jesus’ death and resurrection pronouncement (Helms 63; Luke 24:7-8).

Similar emphasis is placed on the content in Acts (which I had no idea was/is seen as extension of Luke, apparently), which contains preaching by both men and women (Acts 2:17-18).

In general, he sees an overwhelming interest in the role of women (63), something he believes would only come from a woman’s point of view—and given how neglected women are in both the Old and New Testament, this makes sense. 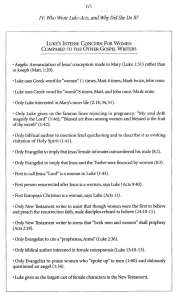 So what does he base this impression on going forward? First, he sees a strong concern for maternal emotion, especially for mothers who have lost a child (67). (I guess men didn’t care?) He also sees women prophesizing (Luke 12:37) and several men and women pairs (70). Apparently, men would not think to mention the women? But perhaps their presence was merely understood?

But there’s more than just these last few seemingly trivial surface elements. Women who speak up are rewarded (72) and wives were just as important (Acts 5:10). Women were even deacons (Helms 75; Romans 16:1). Mary was also a disciple (Helms 75; Acts 16:15), though this is not the Mary.

To cement his case that Luke’s female author had to write this Gospel, he mentions a (seemingly random) example of the hostility towards women in this era: “Good thing for men to have nothing to do with women” (1 Cor. 7:1) (76). Out of all the seemingly (and explicitly) misogynistic content in the Old and New Testament, why pick this line? Does Helms think this isn’t clear at various points?

Still, I did appreciate how much evidence from outside the gospels that he mentions. If you’re going to build a case that women had a stronger say in the Church than much discussion allows for, it does help to pull evidence from throughout the Bible. Although I don’t know that this can support that a woman wrote Luke, I do find the idea intriguing. I think it’s certainly possible. But because I was raised to view men and women equally, I don’t find this as controversial as some would (or do).

Brad Windhauser has a Master's in English from Rutgers University (Camden campus) and an MFA in creative writing from Queens University of Charlotte. He is an Associate Professor (Teaching/Instruction) in the English Department at Temple University. His short stories have appeared in The Baltimore Review, The Santa Fe Writer's Project Journal, Ray's Road Review, Philadelphia Review of Books, Northern Liberty Review, and Jonathan. His first novel, Regret (a gay-themed thriller set in Philadelphia) was published in 2007. You can read more about (and buy) it here: http://goo.gl/yvT24K His second novel, The Intersection, is being published by Black Rose Writing September 2016. He is one of five regular contributors to 5Writer.com. On his solo blog, he is chronicling his experience as a gay writer reading the Bible for the first time: www.BibleProjectBlog.com Follow his work at: www.BradWindhauser.com VirgoWriter@gmail.com
View all posts by virgowriter →
This entry was posted in Helms: Who Wrote the Gospels, Luke and tagged Brad Windhauser, Gospel of Luke, Helms' Who Wrote the Gospels. Bookmark the permalink.

2 Responses to Who Wrote Luke (and Acts), and Why Did She Do It?