God’s Secretaries: The Making of the King James Bible—What Lead to This Bible Version’s creation?

Posted on October 1, 2014 by virgowriter

God’s Secretaries: The Making of the King James Bible—What Lead to This Bible Version’s creation? 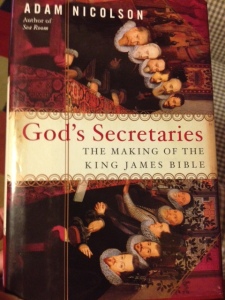 All throughout my childhood and young adulthood, I didn’t realize different versions of Christianity would follow different Bible versions. To be fair, I never became invested in the church in which I was baptized (Lutheran) or the one in which my parents were married (Episcopalian) to find out. I did, however, realize that very different beliefs separated the different faiths—Catholics adhering more closely (faithfully?) to the Bible while other sects took certain liberties with “the rules”; adjusting them for modern life, if you will—for example, thoughts on divorce. Again, this was (and mostly still is) my impression.

So when I undertook this Bible project, it did not occur to me that the first issue I would need to settle was which Bible version to read. I found (and find) it strange that there exist so many versions. You’d think God’s word would be set in stone. Turns out, not so much, as several faiths have created (and embraced) their interpretation on this ancient text—after all, most people read a translation of the Bible anyway. (In case you don’t know, it wasn’t written in English.) Turns, out, a lot can hinge on a different word here or there. As Mark Twain once said, “The difference between the almost right word & the right word is really a large matter–it’s the difference between the lightning bug and the lightning” (Letter to George Bainton, 10/15/1888). So things like Jesus commenting on “sexual immorality,” for example, are open to interpretation, for one cultures version of this idea is different than another’s.

Although I settled on the New International Version of the Bible (because that’s the one my father gave me), I was advised against using The King James Bible. I wasn’t altogether sure why, though. I knew little about this version. I seemed to recall learning at some point that this Bible version was constructed in order to better reflect (or, perhaps, allow for) King James to skirt particular parts of the Bible that complicated his life—such as getting a divorce.

Still, having read the NIV, I was curious about other versions and the way in which they differed—not curious enough to read them though. So when a friend recommended Adam Nicolson’s God’s Secretaries: The Making of the King James Bible, I figured I could learn about the differences as well as the political side of the decisions that shaped this Bible version.

Among other things, I learned my assumptions about what led to the King James’ version’s creation happened to be false. Assuming that the information in Nicolson’s book is correct, the motivation for this Bible version proved to be much more interesting (and less self-serving) than I realized. Turns out, King James was a big Bible fan and didn’t like either the Bishop’s Bible or the Geneva Bibles, two versions in vogue during his era. Newly anointed king, he decided to use his power to bring his dream into reality. He gathered a cluster of learned men to return to the original language of the Bible and develop a better, more exact translation. But did he achieve this? And if so, why was the finished product discouraged to me?

This month I will blog about my reactions to the book and what it has to say about the King James Bible. I’m glad I read Nicolson’s book—I learned a lot of interesting facts—although parts I was hoping to learn about were not discussed. If nothing else, I am still left with the question of why a definitive version of the Bible does not exist.

Brad Windhauser has a Master's in English from Rutgers University (Camden campus) and an MFA in creative writing from Queens University of Charlotte. He is an Associate Professor (Teaching/Instruction) in the English Department at Temple University. His short stories have appeared in The Baltimore Review, The Santa Fe Writer's Project Journal, Ray's Road Review, Philadelphia Review of Books, Northern Liberty Review, and Jonathan. His first novel, Regret (a gay-themed thriller set in Philadelphia) was published in 2007. You can read more about (and buy) it here: http://goo.gl/yvT24K His second novel, The Intersection, is being published by Black Rose Writing September 2016. He is one of five regular contributors to 5Writer.com. On his solo blog, he is chronicling his experience as a gay writer reading the Bible for the first time: www.BibleProjectBlog.com Follow his work at: www.BradWindhauser.com VirgoWriter@gmail.com
View all posts by virgowriter →
This entry was posted in King James Bible and tagged Adam Nicolson's God's Secretaries: The Making of the King James Bible, Bible versions, Brad Windhauser, The Plague. Bookmark the permalink.