Reza Aslan’s Zealot: The Life and Times of Jesus of Nazareth – Understanding Jesus 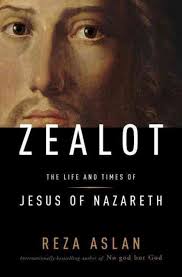 Before I read the Bible in 2013 for this project, I thought Jesus a kind soul, who wandered desert towns spreading love, washing the feet of the poor, hugging those in need, and, ultimately, sacrificing his life for all of humanity. I may not have bought the whole son of God angle, but I always assumed Jesus had been a real person and, give or take a miracle or two, did the things attributed to him.

My reading of the New Testament in general, and the gospels in particular, pretty much confirmed my impression of Jesus. My interest in learning the details of his life guided my reading, which provided interesting color to this general impression. For example, as the fig tree story demonstrated, Jesus had a temper, which endeared him to me—even men of love can have a tantrum now and then. He appeared more human.

Having finished the Bible and moved on to outside texts in order to enhance my understanding of the Bible, I have encountered very little that dealt specifically with Jesus. Given his importance, though, I knew I wanted to investigate books that did. As always, I found a recommendation in an unlikely place.

In the summer of 2013, I watched the brutal CNN interview that went viral with author Reza Aslan (now-famous appearance on Fox News). Having just released a book about Jesus, Aslan was making the promotional rounds. I was in the middle of reading the Bible, so I had not yet developed a strong sense of the New Testament, but I was intrigued enough by the clip to buy his book. If an author who explores the principal character in the New Testament can get a reporter at Fox News that riled up, I had to read Zealot: The Life and Times of Jesus of Nazareth.

Based on the negative reactions to the book (which are outnumbered by the well-deserved positive praise, incidentally), I expected a book that aimed to go after Jesus for the purposes of tearing down the man, his image, and his place in Christianity. This book doesn’t. Instead, Aslan embraces much more of the Biblical Jesus than I thought a scholar would, such as the miracles. Even more interesting is the fact that for much of his reasoning, he relies primarily on a Greek-language New Testament (which he translates himself), cites specific scriptural examples, as well as outside sources, such as Apocryphal books and historical documents that discuss the era. If anything, he goes to great lengths to express his respect for Jesus. He aims to understand Jesus the man before he became Jesus the Christ.

He begins by understanding the world in which Jesus lived. And that world is fascinating.

For the next few posts, I will discuss what Aslan has to say about Jesus and the era in which he lived. He presents a lot of fascinating information that rounded out my understanding of the New Testament.

First up: Aslan’s discussion of Jesus miracle work and exorcisms.

Brad Windhauser has a Master's in English from Rutgers University (Camden campus) and an MFA in creative writing from Queens University of Charlotte. He is an Associate Professor (Teaching/Instruction) in the English Department at Temple University. His short stories have appeared in The Baltimore Review, The Santa Fe Writer's Project Journal, Ray's Road Review, Philadelphia Review of Books, Northern Liberty Review, and Jonathan. His first novel, Regret (a gay-themed thriller set in Philadelphia) was published in 2007. You can read more about (and buy) it here: http://goo.gl/yvT24K His second novel, The Intersection, is being published by Black Rose Writing September 2016. He is one of five regular contributors to 5Writer.com. On his solo blog, he is chronicling his experience as a gay writer reading the Bible for the first time: www.BibleProjectBlog.com Follow his work at: www.BradWindhauser.com VirgoWriter@gmail.com
View all posts by virgowriter →
This entry was posted in Aslan's Zealot and tagged Aslan's Zealot: The Life and Times of Jesus of Nazareth, Brad Windhauser, New Testament. Bookmark the permalink.