Daniel Helminiak’s What the Bible Really Says about Homosexuality: Positive Homosexual Depictions in the Bible

Daniel Helminiak’s What the Bible Really Says about Homosexuality: Positive Homosexual Depictions in the Bible 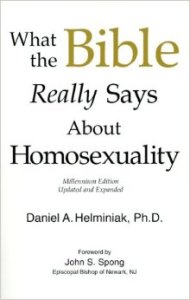 When I read the Bible, I was prepared for all the anti-gay content. Given how often I heard about such content, I almost believed that that was nearly all the Bible discussed. (Turns out only six places even mention homosexuality.) However, I was not prepared to encounter the positive examples of homosexual relationships. Daniel Helminiak’s What the Bible Really Says about Homosexuality addresses the two most prominent examples.

The clearest example is found in 1 Samuel, namely in the love demonstrated between Jonathan and David. As mentioned in this Bible book, Jonathan loved David “as his own soul” (1 Samuel 18:1-4). Given how affectionate these two are with one another, it’s impossible to see this relationship as anything but romantic and not mere friendship. Furthermore, the sadness David expresses at Jonathan’s passing cements this read on these two: he sees Jonathan’s 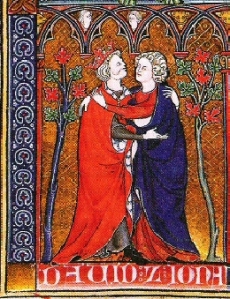 love for him as “passing the love of women” (2 Samuel 1:26)—basically, he could love him in ways a woman never could.

By why is there no explicit acknowledgment or denouncement of this relationship? As Helminiak points out male-male sex was common in this era, so its presence was not particularly notable because the audience of the time would have recognized it without needing help (126). They also would have had no problem with it because it was accepted.

Also interesting, contrary to the way his name is often used to support disdain for progress with gay rights—in particular marriage equality—Jesus had no problem with homosexuality. He not only said nothing about us, his actions speak even louder. Both Matthew and Luke contain nearly identical telling of a particular event that demonstrates Jesus’ indifference to a homosexual relationship.

In these two similar accounts, Jesus heals a centurion’s male slave. But some people have argued that the wording might suggests the boy might actually be the man’s son. By examining in detail the words used to describe the slave, Helminiak is able to deduce that the boy is not the son of the centurion and he is a young slave. This distinction is also important, for given the wealthy standing of the centurion, Helminiak makes clear that the centurion clearly expressed romantic feelings towards the boy—otherwise, he would not have been so concerned with his well-being. Maybe he was just concerned about his property—the salve? Well, as Helminiak points out, older man often kept young slave boys for sexual purposes; therefore, his concern suggests that he was in love with him; otherwise, given his wealth, he could have afforded to go buy another slave (128-9). Rather than judge the centurion for this set-up, Jesus commends his faith and “returned the young man to the centurion in good health” (129).

Given how opinionated Jesus is often shown to be, he would have commented on the relationship had he deemed it “wrong.” If he didn’t have a problem with it, why should we? Of course, modern readers will find the age difference troubling; however, as Helminiak makes clear, people were “lucky” to reach 40; therefore, people matured faster, so, emotionally, the difference between a man and a “boy” would not be as pronounced as we would understand them to be today. Therefore, this is not a depiction of child abuse as we would understand it. Other abuse—given the slavery—perhaps, but, during that era, this practice was so accepted it was not even commented on—Even Paul counsels slaves to be obedient several times over. Jesus observes genuine feeling passing between the centurion and his slave as a positive example of one male caring for another. Thus, an acknowledgment of a positive homosexual relationship—why else would the authors have kept the account in these two Gospels?

Based on all he discusses in his book, Helminiak asserts that we need to pay closer attention to what the Bible says, especially in regard to homosexuality, if we are to use it to pass judgment on others. As he points out time and again, the Bible often does not state what so many people claim it does about homosexuality. That said, he feels that this does not mean that members of the gay community can lead their lives in any way they deem fit; rather, like straight people, members of our community can use the Bible as a moral guide—our sexuality should not matter (132).

At the end of the day, if the Bible does not really claim to denounce homosexuality, why should we?

Brad Windhauser has a Master's in English from Rutgers University (Camden campus) and an MFA in creative writing from Queens University of Charlotte. He is an Associate Professor (Teaching/Instruction) in the English Department at Temple University. His short stories have appeared in The Baltimore Review, The Santa Fe Writer's Project Journal, Ray's Road Review, Philadelphia Review of Books, Northern Liberty Review, and Jonathan. His first novel, Regret (a gay-themed thriller set in Philadelphia) was published in 2007. You can read more about (and buy) it here: http://goo.gl/yvT24K His second novel, The Intersection, is being published by Black Rose Writing September 2016. He is one of five regular contributors to 5Writer.com. On his solo blog, he is chronicling his experience as a gay writer reading the Bible for the first time: www.BibleProjectBlog.com Follow his work at: www.BradWindhauser.com VirgoWriter@gmail.com
View all posts by virgowriter →
This entry was posted in Helminiak's What The Bible Really Says About Homosexuality and tagged Bible and homosexuality, Brad Windhauser, David and Jonathan, Helminiak's What The Bible Really Says About Homosexuality, Jesus and the Centurion Boy, Positive gay examples in the bible. Bookmark the permalink.

8 Responses to Daniel Helminiak’s What the Bible Really Says about Homosexuality: Positive Homosexual Depictions in the Bible